For all you book lovers out there, the videos from the 23rd annual Blue Metropolis Literature Festival are now online and available free of charge. The festival took place virtually from April 24 - May 2 and offered thought-provoking, multilingual events with compelling authors from around the world.
Link to Story

How a local organization is empowering Black youth

You may have noticed the elegant designs used in our recent Black Changemakers series. They were created by a newly launched design company called DestaNation Creative Agency. The agency was born out of DESTA Black Youth Network — a non-profit Montreal community group founded in 2006 that aims to reduce individual and systemic barriers to employment for Black youth.
Link to Story

Will COVID-19 Change How We Think about Disability?

One of my favourite springtime activities is finding the steepest hill within wheeling distance of my neighbourhood in Montreal, then racing down it with “Hindsight” by Wheelchair Sports Camp blasting through my headphones. I miss that freedom of movement—especially independent movement—in the wintertime.
Link to Story

Where Is The Disability Beat In Canada?

Will the Accessible Canada Act do anything to stop airlines from breaking wheelchairs?

Travelling during the holidays is stressful for most people, but especially so for wheelchair users, Aimee Louw says. The Vancouver writer and producer is a frequent traveller and wheelchair user herself. She wrote an essay for Day 6 about the challenges she and many others face, and how Canada's new accessibility law might address them.
CBC Radio, Day 6 Link to Story

Today is the International Day of Persons with Disabilities. This marks a good occasion to discuss Canada’s first ever comprehensive federal disability legislation, the Canadians With Disabilities Act. Disabled people and organizations representing them participated in public consultations in 18 Canadian cities in 2016, letting the government know what would fit best in the federal accessibility legislation.
Ricochet Media Link to Story

What 'The Shape of Water' gets wrong about disability

The Shape of Water leads the Oscar race with 13 nominations, including one for best picture and a best actress nomination for Sally Hawkins. Hawkins has received critical acclaim for her portrayal of Elisa, a non-verbal woman who communicates through sign language. It's been described as a "career-best performance," the "most moving performance" of 2017 and a "marvellous" wordless performance that "holds the movie together."
CBC Radio, Day 6 Link to Story

De-institutionalization and Cripping in Breathe, Directed by Andy Serkis

Guest blogger: Aimee Louw is a freelance journalist, writer, consultant, filmmaker, and radio host living in Canada. Her blog centers on accessibility, crip life, sex, and media. Based on a true story, Breathe covers the adult life of Robin Cavendish, a man who contracted polio in post-World War II England, when requiring a ventilator to breathe meant across the board institutional living and immobility.
The Geeky Gimp Link to Story

“Femme Problems” I said as they tried to unweave my long hair strands out of my winter coat zipper. [Pic: Close-up of me on left with dark rectangular glasses and a sarcastic smile, Megs is on the right in a ball cap and dark t shirt. Megs is also flashing a cheesy smile. We are on the plane on the way to Whitehorse.]
Link to Story

While many Montrealers were celebrating the 50th anniversary of their transit system (STM), I was protesting it. Instead of cheering on the STM on October 14, a group with reduced mobility, elderly people, and our allies fought against the discrimination we faced both in the media and within the system itself.
CANADALAND Link to Story
View More Stories

Born and raised in the prairies, Aimee Louw spent ten years in Quebec, and two in BC, giving her a pan-Canadian perspective on culture and politics.

Her Masters in Media Studies and Hounours Undergraduate in Political Science at Concordia University have led her to specialize in media production and analysis about accessibility in Canada. As the Canadians with Disabilities Act is debated in Parliament this fall, deciding the future of disability in Canada, Aimee hopes to be the go-to journalist for ongoing coverage of this important issue. 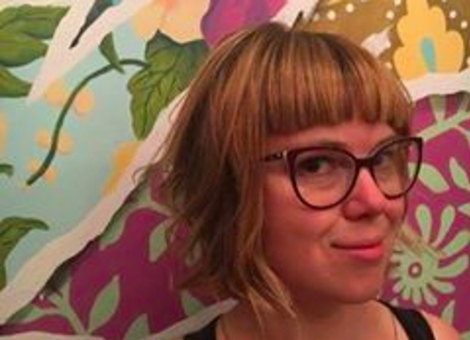